Is that Manahattan in the far distance?

A quieter part of the beach

Sproglet, me and the MB of DUMBO

We also had time to catch a Mets game

Planes alter their course so as not to fly over Citi Field during a game!

Last monday was Memorial Day, which marks the beginning of the summer season over here and, true to form, the weather abruptly changed gear last week in preparation. For those who watch Chanel 9 Neus, temperatures are now reaching well into the high scorchios.

A new hazard in the city now is the steady drip of  AC exhaust water down onto the streets. The first time I felt some drip on my head I was horrified thinking a pigeon had made a deposit. Horror changed to relief and then horror again when I realised what it was.  I like to think that with its little trickle of waste water the city has baptised me a New Yorker but from now on I’ll be keeping my mouth shut on the streets to avoid taking first communion as well.

Last week was a lot of fun mainly because of an influx of friends from San francisco: Tortuga was here launching the Google Wallet and Drewstafa and Tecate were passing through on a well-earned vacation. Toogs also introduced us to his friend Freedlander, a born-and-bred New Yorker, who seems to have a near-encyclopaedic knowledge of this town. Using Freedlander as our guide and paying for taxis with one tap of Tortuga’s phone, we had a fun ride for a few nights.

It was on one of those well-lubricated nights that we agreed to go biking on Memorial Day with Freedlander and an ex-collegue of his, a French girl who has been here for 9 years.

The day of the ride dawned scorching hot. We didn’t even need to set an alarm for our early start as sleeping in those temperatures was proving difficult anyway. I gulped down some oatmeal (that’s porridge to us Brits) but Stacker claims he can’t digest it and spent the subway ride over to the start point moaning that he wanted an orange. I think perhaps he was warming up for the meeting with one of his compatriots, lest she think his complaining rusty.

The ride started by the Brooklyn Museum and after 35 miles of parkways, bridges and coastline, I was red-faced,  sweaty and generally dishevelled. The French girl, however, still looked like she was casually cycling through the countryside, off to get her morning baguette. Sigh.

The parkways I mentioned, while they sound picturesque, are actually more like dual-carriageways but are necessary to get to the beach at Far Rockaway, where we stopped for a Time-Out recommended fish taco (well I at least waited until here to talk about food!). The beaches were humming with people getting the first sun of the season and policing the hubbub was the NYPD, driving their cars noisly over the wooden boardwalks with great purpose. I guess the purpose was revealed when we later saw them busting up a gang of skew-capped and low-waistbanded kids who hadn’t done anything –  well, not according to them at least.

One of the highlights of the ride was finding the Floyd Bennett Field, a disused airfield, which was NY’s first municipal airport. It’s now opened up so you can go in and drive – or cycle or walk -around the old runways. Admittedly it’s just a few strips of concrete but there was something entertaining, if perhaps a little geeky, about goofing off on the bike and pretending to be a plane.  The site’s visitor centre, which was unfortunately closed, is housed in what used to be the control tower and apparently has a spectacular view over Jamaica Bay. One for next time… 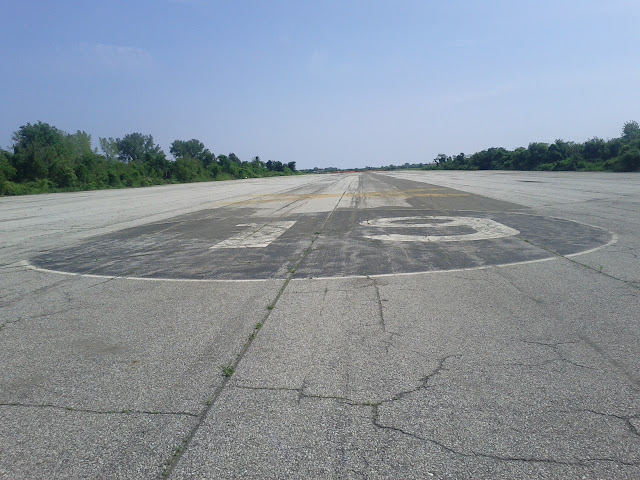 Coming in for landing...

Last but not least, my little brother the Sproglet was also in and out of town the last couple of weeks – Sproglet, we’ll see if you’ve read this far! He offered to show me a place called ‘dumbo,’ which I admit I was sceptical about but he lured me over with the promise of a chocolate shop. I soon discover that DUMBO is the name for the area ‘Down Under the Manhattan Bridge Overpass’ and that I’d been tricked into visiting Brooklyn…

Wow, I’ll have to try harder to keep these posts shorter! If you’ve made it this far  – lots of love from NYC!!