Bonne Fete Nationale!
To our friends and family in France.

Well we’ve only been in Montreal for two short weeks but we’ve somehow already slipped into as comfortable a routine as if we’d been here two years! After the bustle and excesses of New York, it’s been a relief to shift down a gear or two. We’ve set ourselves up at a new co-working space,  Station C, and have been going there three days a week, spending the remaining days going to the gym and then bouncing around the trio of coffee shops clustered on the intersection of Park and Milton nearby. We’ve spent our days so far, including the weekend, focusing on churning out code to make up for the amount of time we lost in planning, packing, travelling and settling in to Montreal – not to mention cleaning!

I definitely underestimated how much time we’d spend on the logistics of our journey. The cycle starts with trawling craigslist looking for accommodation and then finding the cheapest method of travel and planning the journey. Then, once arrived, it’s figuring out the what-to-do and where-to-eat. There’s a whole new transportation system to learn, finding the best pay-as-you-go phone plan and even silly little things like the extra time it takes to locate things in a new supermarket. In addition I’m constantly trying to stop myself from losing whole mornings researching potential next destinations!

The co-working experience continues to be one of the unexpected positives of the trip so far. In New York, where our living space was smaller, I’d initially looked on it as a necessity but it turned into a real advantage in terms of networking and productivity. In Montreal the experience has been equally good and the people have been very welcoming and inclusive, taking us out for lunch with them every day.

Probably benefiting from the fact that one of the co-founders is a designer, the open-plan office has a trendy yet warm feel with its solid wooden tables, black couches and red walls. The book shelves are lined with art and travel books, the geeky Unix manuals standing out like sore thumbs.

Despite all this, the first thing I noticed when arriving was the door at the back of the room that had a sign on it saying “Toi – Lette”. I remember thinking “I hope that either that means ‘broom closet’ in Quebecois or there’s a really long corridor behind that door.” Alas, no. The toilet door opens right onto the office and since I can hear everything going on in the office while I’m in there, I can only assume the reverse is true.

Merde alors, how am I expected to keep up the girls-don’t-toot reputation when I can’t even go to the bathroom to covertly not-toot?!

TMI? My apologies, back to banalities…

In general we’ve found our new hometown to be greener, quieter and more laid back than our previous one. It is possible to walk down a street and actually be the only person on it. There is even a chance of encountering some wildlife beyond the occasional rat. I had been happy to leave behind the black splodge on our NYC bathroom ceiling that, without my lenses in, had made me jump out of my skin every morning… until we arrived here and swapped the black splodge for it’s scurrying, 8-legged and very real counterpart. Goodbye Ratatouille.. hello Charlotte! 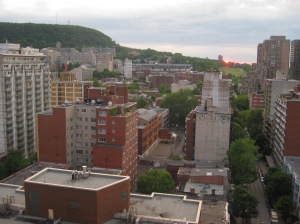 It's so green! (Stacker requested I add a better view from the balcony shot)

Before I give anyone the wrong impression, this is a real city with plenty going on but the city does seem to expect less of you. The frantic need to try every single hip new eatery or bar is gone… and since our kitchen situation is much improved we’re finally able to cook a real meal at home for once!

It also turns out we each have a cousin here, who worryingly share the same last name – although luckily Stacker’s cousin inherited her name through marriage (panic over)! Being English I’d of course worried about whether it was going to be awkward meeting up with people we barely know, and especially speaking French with Stacker’s family, but both meetings were fun and we took the opportunity to tap some local knowledge from them.

Well, we’ve finally decided we’d like our next stop to be Barcelona as we’ve both always wanted to try out living there. And so yesterday we kicked off the next cycle of searching for flights and accommodation.

After scanning through all the usual flight finders didn’t turn up anything under $800, we started questioning the wisdom of taking a transatlantic flight during the tail end of the peak holiday season. Then on a whim, inspired by something Stacker’s cousin had said about boating to Quebec, we decided to look into boat crossings – there is after all more than one way to skin an ocean.

A day later we’re booked on to the Queen Mary 2, which for the same price tag ($799 to be exact) will not only bring us to Europe but will also take care of a week’s rent and food – well that’s our rationale anyway and we’re sticking to it!

Now we just need to research accommodation for the gap between the end of our lease here and our crossing date on the 5th September, the trip back to New York where the QM2 docks and the flights from London to Barca… perhaps we should just have taken the plane after all!