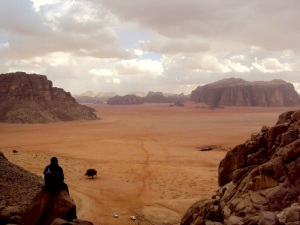 Stacker looks over the brooding desert

Three hours after leaving Amman the sky above the Desert Highway was still a heavy shade of grey and the wind was howling and pounding at the windows. The road began to climb and the barest sprinkling of hail twinkled at us from amongst the detritus on the side of the road.

We were beginning to wonder if we’d taken a wrong turn on our way to Wadi Rum – there was dust and rubble and discarded plastic bags but no sign of the beautiful sun-baked desert that we’d seen in photos.

Abruptly the the road crested a ridge and suddenly the roadsides dropped away, a valley opened up below us and there it was: a bizarre moonscape of sandstone crags in jumbled layers of grey, beige, purple and ochre. Buffed smooth by the sand-laden winds and sculpted into spires and arches, the rock formations had the look of elaborate melting candles. Leagues of martian-red sand rippled out to our right and, in the distance, a hazy mountain range marched along the far side of the valley.

“This is nothing,”  said my brother Fonz, who was at the wheel. “Wait until we get to the reserve.” 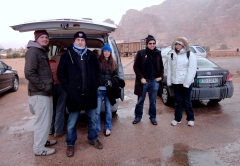 Drenched in the desert – Why are we here?!

Half an hour later we made it to the Wadi Rum visitor centre and found our bedouin guide, Suleman. At that moment, the heavy clouds delivered on their threats and started pelting us with a mixture of rain and hail.

We began to wonder if spending a night in the outdoors was such a great idea but Suleman was in great spirits, explaining that he hadn’t seen rain like this in nine years. I nodded and agreed that we couldn’t begrudge them some much-needed moisture but secretly sent up a selfish plea for the it to go away and come again another day.

Meanwhile the chill and pounding rain had prompted my friend Mayhem to trade her flipflops for a pair of 3″ heels. She was met with general disbelieving gawks from the rest of us. “What?” she said, unabashed, “it’s all I’ve got!” Her trainers had been in her husband’s bag and he’d been turned away at the airport for having an almost-expired passport.

Deciding to take the plunge, rain or no rain, we traded our comfortable minivan for Suleman’s hardy jeep and loaded it up with our overnight bags. No sooner had we made the choice than the clouds melted away and we began to feel the warmth of the midday sun. What little water remained on the ground disappeared into the thirsty sand before our eyes. Sorry parched desert, hopefully you won’t have to wait another nine years..

With two of us riding up front with Suleman, three in the back seat and two rolling around in the luggage bay, we were driven through Wadi Rum village and then bounced along desert tracks to Lawrence’s Spring. A jumble of immense rocks rose up towards a tall crag where a silvery fig tree was growing, betraying the water source at its roots.

Suleman suggested we climb up the mess of rocks to the spring and four of us obliged, feeling energised by the beautiful surroundings and the prospect of a sweeping view over the wadi. We were not disappointed. Looking down on to the landscape we would soon be exploring, a mixture of awe and zen, what T.E. Lawrence called the “imprint of the desert”,  crept into our hearts. 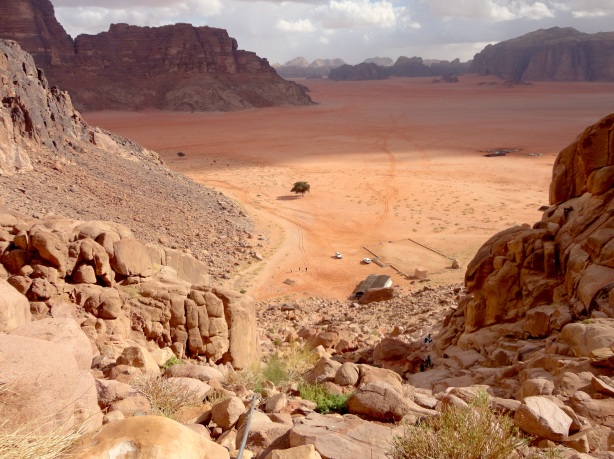 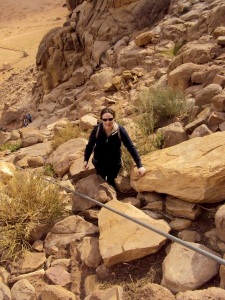 Zzella scrambling up the rocks

As we were climbing my cousins, J&J, had written a giant Happy Birthday for me in the sand at the bottom. Busy trying to keep my footing on the loose rock, it took a few nudges from Fonz and Stacker for me to finally spot it. It marked the beginning of a perfect storm of 30th birthday celebrations – blown away by this amazing country, and thankful to have my wonderful family and friends here to explore it with me, it was becoming easy to forget that I was leaving my 20s behind.

Our next stop was Khazali Canyon, where we gingerly made our way along the 100m of narrow ledges in the canyon wall to check out old Nabatean rock carvings. After some initial wobbliness, Mayhem showed off her desert-chic by rocking those 3″ heels over the uneven terrain.. and then made us all crack up as we arrived at our camp for the night and she attempted to roll a wheelie suitcase through the sand to her tent. 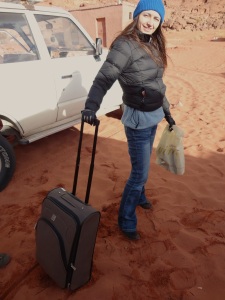 The camp was a cluster of square tents, each draped with a heavy woollen canvas, with a large communal tent housing couches and a fire pit. There was also some permanent buildings for the kitchen, solar showers and toilets. We realised this wasn’t perhaps going to be the most authentic desert camping experience – especially when we spied the metal beds and piles of fleecy blankets in our tent – but we felt glad of the extra comfort nonetheless,. At this time of year, the idea of sleeping under only a blanket of stars isn’t all that appealing anyway!

The bedouins welcomed us with sage tea as we chatted with Suleman about the following day’s activities. After he left us we scaled the sandstone formations behind the camp to watch the sun go down, accompanied by a plastic bottle of rum. Unfortunately those pesky clouds rolled back in and obscured the sunset but, sitting on our rocky perch and gazing over the endless red desert, we all felt that now-familiar sense of peace and contentment swell inside us. Or perhaps that was the rum…

The camp from the rocks above 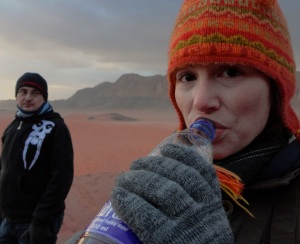 Despite the blankets, we all woke up the next morning chilled to the bone, except Fonz, who earned some grumpy looks from his frozen tent-mates by claiming he’d even thrown a blanket off in the night. We slowly warmed up over a tasty breakfast of fool, eggs, hummous, zaatar and hot bread and tea. By the time Suleman returned for  us, a battered snowboard strapped to the roof of his jeep, we were ready for a morning of scaling more rocks.

I did my best to defy my jelly legs as we scrambled to a viewpoint high above T.E Lawrence’s ruined house but left Stacker and Fonz to it as they climbed up Um Fruth, a precarious stone arch also called the Medium Bridge. As we drove around between the different points of interest, we took turns riding on the roof, clinging on for dear life as the jeep accelerated to burst through the deep sand. 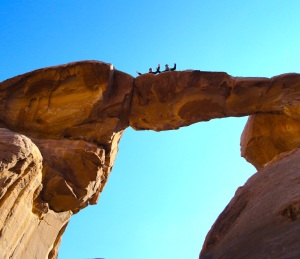 Stacker and Fonz on the Medium Bridge

Riding on the roof

Just before lunchtime Suleman kicked us out of the jeep and put us to work foraging for firewood. Once we’d dug up enough dead shrubs he drove us to a giant sand dune and handed us the snowboard. As we kicked off our shoes and raced over to conquer the pristine red pyramid of sand, he set about building a fire and preparing lunch.

Hiking up the soft, yielding sand was a whole lot harder than it looked and soon we were all breathing heavily as we made our way up the dune’s delicate ridge.  The view from the top was worth the climb in itself but we barely spared it a glance before launching ourselves down the dune, some sledging on the snowboard, some running and Raquel even attempted a brain-jangling roll. J&J nailed it when they described  it as ‘like running through chocolate mousse.’

After an hour of frolicking in the chocolate mousse, our tracks criss-crossed the dune’s face and its delicate ridges had been completely trampled by our hike to the top. I hoped that the wind would soon erase all trace of our visit but those thoughts were pushed to the back of my mind as that same wind was beginning to waft the smell of barbecued chicken towards us.

Rejoining Suleman, we shared a simple but succulent lunch of charred lemon-marinated chicken and mediterranean vegetables cooked in tomato broth followed by some more of that tooth-dissolvingly sweet sage tea. By then it was time to face the real world again and we started out on the drive back back up the Desert Highway, heading to the Six Senses Ma’in hot springs resort, where the rest of the birthday delegates would be arriving.

A missed turn-off in the rush hour traffic around Amman threatened to erase our desert zen but upon arriving at the resort Stacker and I were whisked straight to the spa for an olive stone scrub and olive oil massage, during which our relaxation levels reached almost comatose levels.

After an evening of catching up with everyone who’d arrived over some margaritas and nargileh pipes I reflected that I could scare imagine a day that could top this one. Perhaps the only thing missing was some real chocolate mousse…

No man can live this life and emerge unchanged. He will carry, however faint, the imprint of the desert, the brand which marks the nomad; and he will have within him the yearning to return, weak or insistent according to his nature. For this cruel land can cast a spell which no temperate clime can match. – T.E. Lawrence

We organised our desert excursion through Bedouins of Wadi Rum. If you’re interested in a similar experience you can contact English-speaking Suleman through their website: www.bedouinsofwadirum.com

Mucho love & thanks to all those who joined me for my 30th birthday.
Cheers to ‘Cereal Killer’ Raquel for some of the photos in this entry and her creative birthday card delivery mechanism.
A grand merci to Sproglet for the organisation.. and the olive massage! Hope you’re enjoying the inflatable jamon…

One thought on “Red Red Rum”