Nestled in a deep rift, more than 400m below sea level, is a lake so warm and salty that its density is low enough for a human to float in without any effort.

After a morning of massages, facials and general soaking in the hot springs at Ma’in, twenty two of us were prepared enough to head down into this rift, our earth’s lowest point on land.

Excited to be about to experience being as light and floaty as a Malteser, we rolled up to Amman Beach, towels and flip-flops in hand. “17JD each,” said the man at the entrance. 17JD is about £15 or $24. It seemed pretty pricey for a shower block next to a dead sea and even with Sproglet’s negotiating powers turned up to the max, they best they could offer us was one ticket out of the 22 for free. But, we were a captive audience and in the end we coughed up the cash, despite choking on it a little.

Soon there was a steady tributary of us inching into the sea. One at a time we would stumble over the extremely sharp, uneven and salty rocks, each one laughing at the exclamations of the one in front until it was their turn to try and walk over the sea’s teeth. The anticipation was high, so much so that Jojoba completely forgot to remove her new shirt before wading in.

After walking became too difficult, we lowered tentatively into the water, uncertain, thinking ‘I ate a lot of mansaf yesterday, what if I don’t float?”

The sea managed to sweep us all away though and soon we were giggling and bobbing around like so many turds in a pond!

Stacker floats despite all those falafels..

I felt buoyant, unsinkable and incredulous. I could feel my fingertips stinging where I’d bitten my nails too closely and the three long gashes I’d received when I’d slipped on my way into the sea were also burning. All of that was pushed to the back of my mind though as we entertained ourselves by screaming “shark!” and attempting to manoeuvre into place for photos, bashing into each other and more than one of us getting a mouth or eyeful of the rank seawater.

It being early February and a not particularly warm evening, we had the beach more or less to ourselves. Other than us there were just three other guys bobbing around nearby and one other man who, bizarrely, appeared to be videotaping us all from the shore.

As the sun started to go down overhead, we started to trickle out again, back up the steps to the shower block. The sea has been receding rapidly due to the over exploitation of its only tributary, the Jordan River, and each year the walk from sea to shower gets a little longer.

On the way up, we passed by two fat topless men closely guarding a bucket of dead sea mud but no-one took them up on their offer of a mudpack. We did however make the most of our 17JD (cold) showers to rinse off the sticky, oily water that had begun to itch our skin and scalps.

Feeling like I’d crossed a big item off my travel to-do list, we headed back uphill (well, everywhere is uphill from here) to Ma’in to regenerate for the following day’s trip to another to-do list biggie: Petra.

Another stalwart of the Jordanian tourist industry, Petra pips both the Dead Sea and Wadi Rum to the post of most visited attraction in Jordan. It was clear from the moment we arrived that we wouldn’t be having this spot all to ourselves.

Entrance to the park is a huge 50JD (£45/$70), which in theory also includes a horse and carriage ride to the entrance of the Siq but in reality that horse ride will cost you 2JD in strongly-suggested tips. We elected to walk anyway, preferring to take our time and look around.

The Siq is the ceremonial entranceway to Petra. It means “the shaft” in Arabic and, true to its name, is a long, narrow passageway with sheer sides of rock in blushing hues of red and yellow. There are traces of human habitation on the walls in the form of carvings and niches but otherwise there is no hint of what is to come.

I try to imagine myself as the Swiss explorer who “re-discovered” Petra in the 1800s. Ruining my moment a little, the local kids tout postcards and other junk with perfect American accents. “Postcards, 1 dinar! Coins, 1 dinar! Everything, 1 dinar!” Every so often a horse and carriage rumbles through the corridor at breakneck speed and you have to flatten yourself to the sides to avoid being trampled. 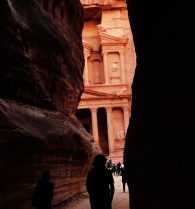 The Treasury at the end of the tunnel

For the second time in as many days, our anticipation levels are stratospheric. Eventually, the Siq narrows and the tunnel’s end comes into view – a long slit through which sunlight streams turning the rock walls into a dark frame for the snapshot of the Treasury that is illuminated just beyond. Our pace picks up and soon we’re standing in front of the famous monument, no less amazed for having seen it in a hundred pictures.

The sheer amount of work it must have taken to carve such a thing from the rock is mind-blowing. I reflect that today’s humans have neither the appetite, the patience nor the skill for this kind of undertaking. Perhaps that’s a good thing, considering the number of backs that must have been broken over this unusual stone city. For the Treasury is just the very beginning, there is much more to discover for those who venture further in.

And so Stacker and I took our obligatory Treasury photo and continued around the corner onto the the Street of Facades, a group of dwellings gouged out of the sandstone. In any other setting they are on their own an impressive collection of ancient monuments but in this case a pause was needed to let overdosed eyes recover from the Treasury. More representative of the every day lives of the Nabateans, the facades made this magical rock carving civilisation seem more real – just regular people who need homes like everyone else. I wondered which one was the butchers…

Homes for the rock shapers

Continuing down past the Romanesque amphitheatre (apparently built by the Nabateans long before the Romans arrived) we caught up with some of my oldest friends Captain Shawarma and She Who Calls Me Smels along with her partner Blake La Motta, who were beginning the walk up to the Royal Tombs.

After climbing up a series of crumbling steps and crossing a wooden bridge we were finally alone and away from the crowds and the vendors. Disinclined to move from our viewpoint, we sat there for over an hour, talking, people-watching and looking over the city as the sun started to set and the changing light played with the shadows around the stone dwellings and subtly shifted the colours of the rocks around them.

“…from the rock as if by magic grown, Eternal—silent—beautiful—alone!”¹

She Who Calls Me Smels (and is the only one with permission to..) picked that moment to give me my birthday present, – perhaps one of the more beautiful places I’ve ever received one! – and then we descended from the tombs to rejoin J&J, One Woman vs Ageism  and Fonz for some strengthening sage tea before the long walk out to our hotel.

Spending a second day in Petra is only 5JD extra so the next day most of us made our way up to the gigantic Monastery and to the stunning viewpoints beyond. As the donkey owners keep reminding everybody, to get up to the Monastery you must climb about 800 uneven steps. Feeling less than energetic and the beginning of a cold coming on, I broke down and decided to take them up on the offer of a ride. Abu Debbie and J-Femme joined me.

Abu Debbie does it biblical style

When I saw the donkey, at first I worried whether it was large enough to carry me but (of course) its owner assured me it was able to carry a much heavier load than me. Luckily, the sure-footed animal seemed to do fine and didn’t stumble or hesitate on the way up, although I’m sure he wished he’d scored pint-sized Abu Debbie as a rider instead of me! After about 100 steps I started worrying more about the owner whose breath I could hear coming deep and ragged in between muttered curses as he followed his hardy donkeys up the trail.

On the climb up the bedouin vendors offered us everything from tea to whiskey to broken keys and old coins but unfortunately found no takers in the group. “On the way down, then!” they said, smiling. Unlike my experience with vendors in other parts of the world, in Jordan so far a simple “No, thanks” has always been enough to indicate I’m not interested. Instead of insisting, they’ll usually just respond with a “Welcome to Jordan.”

Amazingly, perhaps because of those 800 steps, the Monastery area was completely deserted. Even more gigantic than the Treasury, the Monastery’s gaping doorway dwarfed us all but, once we’d climbed over the 2m tall doorstep, we saw that the huge monument simply houses a single relatively humbly sized room. Clearly a small room of great importance, even if we’ll never know for sure what its purpose was.

Those who have read the Petra guide book or spotted the less-than-obvious signs,will know that a short walk up beyond the Monastery leads to a number of viewpoints all claiming to have ‘the best view in Petra’ and – true or not – are well worth the little extra climb. Luckily Fonz was in the know and lead us up there for some more camera candy before the time came for us to start the walk out of the dead city.

Team Zzella’s Birthday on top of the world

Having never ridden a camel before, I hitched one of those on the way back to the Treasury but was less impressed by the treatment of these animals when, at the end of our ride, the owner kicked one of them in the neck and called it “Italian” because it was supposedly lazy. I was shocked but didn’t say anything at the time.

Reading up on the subject afterwards, I came across some good advice from the Princess Alia Working Animal Clinic, who are working to turn the tide on animal cruelty in Petra. Rather than just trying to educate the animal owners, their main focus is actually on tourist education because, in the end, we are just as responsible as the abuser if we let an animal get abused on our buck.

Since I’m clearly no good at speaking out, next time I’ll just walk!

Credits to Captain Shawarma, Blake La Motta and Abu Debbie for some of the pics.

5 thoughts on “The Dead Sea and the Dead City”