I’m writing this in a slight state of identity crisis. I’m not entirely sure what happened. This evening we dipped a toe into hipsterville and, like in a terrible horror movie, gnarly hands burst out, gripped our ankles and tried to suck us in.

Currently, I’m writing this from a MacBook perched on top of a coffee table fashioned from an antique sewing machine, my feet resting against the cool metal of the still-working pedal. All around me are un-abashedly exposed brick walls and I’m wearing a T-shirt bearing an illustration of a fixie bike. I think my glasses may have been round this morning, but it seems they’ve morphed into nerdy rectangles…

The day started reasonably Stacker-and-Zzella-ish – watching the England and France Euro games in the local dive bar. The kind of place where cheez-whiz is an acceptable substitute for cheddar and, if you threaten to leave, the waitress brings you free shots. Shots with pickle juice chasers.

On a normal day, we might have gone back to the co-working space, done some work and then ventured out into the food mecca that is Manhattan to knock another place off our list of eateries to hit. But today we had a date with the hipster capital of New York – Williamsburg.

It all started yesterday when my daily “the Skint” email dropped into my inbox, packed as usual with free or cheap things to do in the city. A competition to win tickets to Montreal caught my eye and I absent-mindedly entered my email address into the form.

Four hours later another email pinged into my inbox claiming that I’d won tickets to see an indie band called “of Montreal” along with some other incredibly trendy-sounding bands: “The Beach Fossils”, “The Thermals” and “Jens Lekman” at the Northside Festival in Williamsburg. Hmm, no tickets to Montreal but I was still pumped that I’d won something, even if I wasn’t quite sure what it was yet…

Being a bit slow on the musical front, I had no idea who any of these bands were and, evidently, neither did Stacker – “Jens Lekman? Sounds like an ex-Arsenal goalkeeper…” . A quick poll of my Facebook friends seemed to hint that it was worth going and, anyhow, we’d been meaning to explore Williamsburg for a while. So, a day later, I donned my most hipster T-shirt, ruffled my hair and we boarded a train to Brooklyn.

After queueing for half an hour – all the while assuring Stacker that, no, being British doesn’t mean I enjoy queueing, it just means I’m good at it – we made it inside just as Jens Lekman started playing. “Yep, this is pretty gafapasta” Stacker said, using our Catalan codeword for hipster.

The crowd milling around were what you could call textbook hipsters – skinny ties, skinny jeans, plastic glasses,fedoras. It’s possible that there was some sort mandatory uniform for this event that we weren’t aware of.

Girls were handing out free Vitamin Water and the sides of the compound were lined with food trucks bearing names like KimChi Taco (Mexican/Korean fusion?) and Gorilla Cheese (well at least we’d escaped the cheez-whiz). We were also promised the incredibly cool-sounding Urban Lobster truck but sadly he may have been too cool to show up.

Being somewhat of a geek myself, I feel I should identify with the hipster movement and its culture of independent thinking and valuing creativity and intelligence. But the claim that hipster fashion stems from the rejection of mainstream consumerism seems to fall flat when they all go out and buy exactly the same designer faux-vintage glasses and get the same ‘edgy’ haircut. Perhaps these aren’t true hipsters after all.. or perhaps I’m still looking at this from the wrong side of the fine line between geek and cool…

Anyway, I was hoping that I was pulling it off and that people were fooled into thinking that I ride a bike with fixed gears and know who Jens Lekman is. I started thinking how excited my cool hipster kids would be when I told them that I went to the first ever Northside Music Festival….. 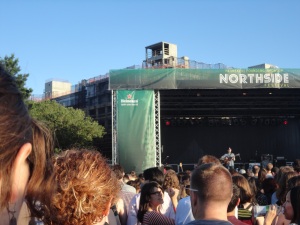 An hour later, after spending most of Of Montreal’s set in the queue to the toilets, we were only halfway through the ridiculously long line for KimChi Taco. We decided that we were pretty tired of standing in lines and Williamsburg was still out there waiting for us.

We wondered down the length of Berry street, passing a number of small neighbourhood restaurants, chilled-looking bars and a beer garden. They looked tempting but our destination was to be the NiteHawk cinema. We were drawn to it by the simple idea that they serve food and cocktails to you while you watch the film but, when we arrived, we realised we may have accidentally stumbled across the hipster mothership.

We bought drinks and tickets for The Dictator from a curly-haired bartender behind a dark wooden bar, above which a retro ticker touted today’s films. Off to the left of the bar, one of the walls had a floor-to-ceiling glass case filled with the box covers for horror movies from every era. An arty looking crowd lingered, waiting for the doors to open.

The movie theatre itself was small and comprised of a handful of what looked like school desks circa 1920, retrofitted with cup holders. A friendly waiter dressed all in black introduced himself and explained the process to us. He took our food and drink order and then told us we could communicate with him during the movie using the little papers and pencil lodged in a little slot under the desk.

Before the movie, we were shown a half hour preshow of film snippets, musical performances and other tidbits, all related to the main event. The montage was clearly put together by someone with a sense of humour who truly cared about film and art in general. As the the trailers for the upcoming random mix of mainstream and eclectic films was rolling, fish tacos and mushroom croquettes landed on our school desk. 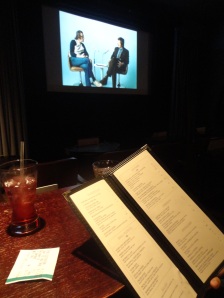 Even though we weren’t watching the most arty of movies, the intimate setting made the whole experience seem more special, more entertaining and, somehow, way more cool. Our laughs mingled with those of the dozen other people there – until, that is, the awkward moment when the satire was suddenly directed at Williamsburg in the form of hairy activist Zoe’s food co-op that only hires disabled political refugees and has a candlelit organic rooftop garden.

Anyway, the food was excellent and, by the end, Stacker and I were like putty in their hands. I almost wanted to buy tickets for tomorrow’s showing of Ferris Beuller’s Day Off on the spot.

It was definitely time to get back to our home in Chinatown before we started donning beanies at quirky angles.

As we left, I visited the ladies bathroom and I couldn’t help but notice the crumbling, antique wooden dresser with distressed paint and rustled handles that was being used to artily store mundane items like toilet paper and air freshener. I was pretty sure I’d seen an identical one in the bathroom of an East Village bar. Even hipster bathrooms, it seems, have a uniform…