Ealing turns out to watch the olympic torch relay

As with most things, we Brits have taken the idea of the Olympic Games spirit and added a healthy dose of cynicism to the mix. What is supposed to be the celebration of athleticism and a chance for the nation to show off is more or less viewed as a roadblock in our everyday lives. Something we just have to man up and get through rather than enjoy.

Over the last few months, if you were to ask a Londoner whether they were looking forward to the Olympics, the usual answer would either be ‘naaah, I’m getting the hell out and going to Costa Brava with the missus’ or a mumbled comment about how terrible the traffic was going to get.

Yet today, as the Olympic torch relay passed through Ealing under a rare clear blue sky, it was clear that the cynical layer had been shed along with the winter coats and Londoners were out in force to enjoy the day. We do, after all, enjoy a good party. 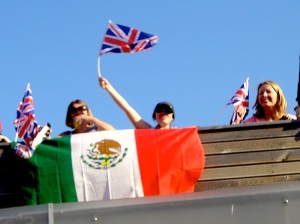 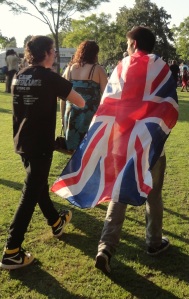 The double whammy of having just emerged from the queen’s jubilee ceremony and then being launched straight into the Olympic proceedings, seem to have engulfed the capital in a new wave of patriotism. These days it seems one can’t leave the house without seeing the union jack in some form or another. This may seem normal in some countries but, as long as I’ve been alive anyway, the waving of the union flag has until now mostly been done either ironically or extremely discreetly.

Long the domain of either punk bands or the uber-nationalist, the union jack has endured a period of unpopularity for as long as I can remember. For myriad reasons, it seemed to carry a weight of shame with it. It simply wasn’t cool.

All of that has been promptly forgotten. As the olympic torch was carried through my neighbourhood by a muslim woman covered head to toe in white, we waved those flags like we’d been doing it forever. 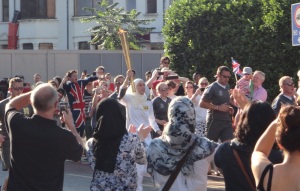 The West Ealing leg of the torch relay

I, for one, am all for it. I’ve always secretly envied Canadian backpackers who proudly bear their maple leaf emblem, stitched onto everything they own. Perhaps now I can wear my country’s colours without people thinking I’m a fully paid-up member of the BNP.

Patriotism aside, those out in Ealing tonight enjoyed the best weather of the year so far combined with an enviable community spirit that had everyone buzzing, their traffic woes and tomorrow’s jobs forgotten. The party was bolstered by local artists playing drums or break-dancing and local businesses handing out free food and drinks. 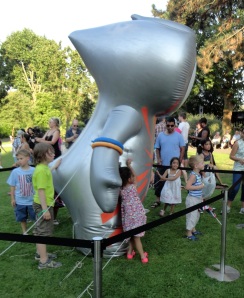 The Olympic mascot – only kids get it

Of course, the whole thing had to be paid for by someone and the official sponsers were out in force. Llyods TSB attempted to sell their current accounts through a megaphone from their float, Coca Cola handed out free bottles and Samsung gave out some weird inflatable tubes that make a noise when you bash them together.

For a brief moment my in-bred cynicism returned as I observed that everyone was lapping up the freebies, not realising, or choosing to ignore the fact, that they were turning themselves into walking advertisements. The Samsung inflatables seemed to last about three or four bashes before they would explode and inevitably end up littering the pavement.

Any misgivings were quickly quelled though as one of the torch-bearers came by the Castle Inn, where Stacker, Fonz and I were enjoying a post-relay drink. Fonz spotted her out standing outside and I was out the door before you could say ‘Mandeville’, muscling in for the photo op of the day. As the torchbearer let me hold the torch and pose for a photo with it, I thought ‘this is the coolest thing ever!’

I get my hands on the Olympic torch