Amman may be a good middle-ground for plane refuelling but it’s no good as an interim between Berlin and Bangkok. Chilling with little brother Sproglet in Amman’s rooftop bars and then enjoying a soak in the hot springs at Ma’in was great for relaxation but quiet, conservative Jordan did nothing to ease us in to the madness here. 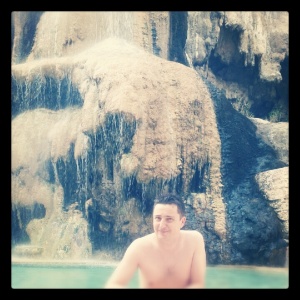 The airport and immigration went smoothly but then we sped deep into sprawling Bangkok – no seatbelts of course, there’s that in common with the middle-east – to our hotel off Sukhumvit street. Sukhumvit is one of the main thoroughfares, bustling with traffic and long stretches of market stalls where jelly shoes and novelty underwear go to die. Dotted along it are scores of street-food vendors selling grilled corn cobs, whole fried fish, noodles, freshly-squeezed pomegranate and endless other goodies.

The hotel was tucked away in a little side street – called a “soi” – off Sukhumvit and, as we sipped some happy hour cocktails and munched a jaw-droppingly expensive summer roll by the hotel pool (naturally the cheap food ain’t on hotel rooftops), we twice heard the screech and crunch of traffic accidents on the busy road.

Deciding to escape the hotel food and keeping an eye on that erratic traffic, we ventured out to scope out some Thai food at a sort of restaurant-shack that seemed a good middle ground between restaurant and street food.

We scoffed up the steamed greens in oyster sauce, fish cakes, fried chicken and crab in curry sauce and washed it down with a couple of beers. The bill came to 800 bahts (£16) after the waitress, noticing the look of surprise on our faces, had promptly tacked on another 100 bahts. What she didn’t realise was that we were actually surprised by how expensive the crab dish was – more than both our 500ml beers put together.  Oh well, we paid our farang tax and beat a hasty retreat. The ice-cold Singhas had been tasty but hadn’t done much to take the edge off the humid heat and, as sweat trickled down my legs, I began to regret the decision to go out wearing jeans.

The jeans had been a reflex from the days of covering up in Amman so today I wised up and donned a sundress instead. Even so, I felt overdressed as we wondered down Soi Cowboy on our way out to dinner. Lit up like a Christmas tree and lined with go-go bars, Soi Cowboy is the clichéd red-light district (well red-light street anyway) of Bangkok. Ageing Western men sit sipping beers on bar stools outside the bars while tiny, skimpily-dressed Thai women cluster at the entrances touting for business. As for what happens inside, well, I’m happy to leave it to my imagination. Or perhaps to Stacker’s imagination. 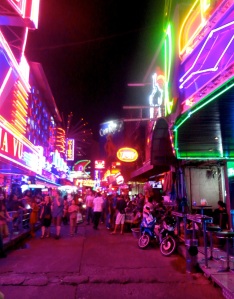 Stacker, however was preoccupied. Normally the top of his to-do list after we settle in is to find us sim cards with data plans so I was a bit surprised when he was ambivalent about stopping in any of the numerous 7-Elevens as we walked back to our hotel. Clearly he had another destination in mind and from the cheeky light in his eyes I had an idea of what it may be.  While I’d been doing some work earlier over the intermittent internet at a coffee shop, he was scouring the net for where he could get his next fix in Bangkok.

Berlin had done nothing for his habit – there were hook-ups everywhere. Amman was far from dry either. Shish taouk, shish kebab, none of that interested him.

Yep, the only shish he was interested was a shisha, a hookah hook-up.

I guess sim cards will be a job for tomorrow…

Since indoor smoking is still alive and well in Berlin, shisha cafes in Berlin are numerous and we often coupled restaurant recommendations with the nearest shisha bar. There’s nothing like a shisha and mint tea for that post-dinner digestion. A comprehensive listing of shisha bars in Berlin can be found at Shisha Berlin. Our favourites were the friendly welcome and the mint shisha – straight-up, no mixing – at Marrakech (Schönhauser Allee, the Torstraße end) and the potent Blue Mist and decor at Kleopatra (Chausseestraße). 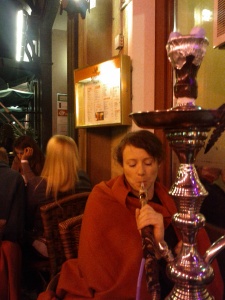 Obviously it’s not hard to find a decent shisha in Amman, most cafes offer them and if you wander down Rainbow Street you’ll find no end of cafes. Try the rooftop at Sangria for tapas and an amazing view with your pipe, the terrace at Agave for kick-ass cocktails or the Old View Cafe if you’re off the sauce as it’s alcohol free (try a Jallab instead) and has a view out on to the citadel. The picture below was taken on the terrace at the Marriott Hotel by the dead sea, a forty minute drive from Amman and a great spot for sunset viewing. 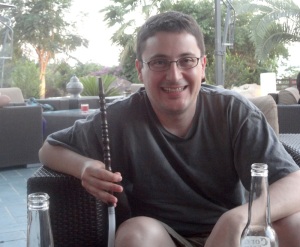 A cluster of arabic shops and restaurants can be found on Sukhumvit Soi 3/1 and amongst them is Nefertiti, a sports and shisha bar that’s open till 4am. For a pretty outdoor terrace and to couple your shisha with delicious arabic food – they have molokieh, fatta or maashi as well as the popular grills, kebabs and mezze – try Arabesque on Sukhumvit Soi 2. 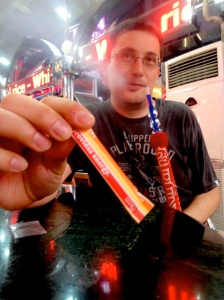