While many people, given the choice, would choose to live in a world of permanently beautiful sunny weather, I often find myself looking forward to winter. For someone whose skin is capable of going from Casper-coloured to a toasty Elmo-like hue  in about 15 minutes flat, a cloudy sky isn’t always a terrible thing and the novelty of changing seasons is something I’ve always enjoyed.

State of the art sun protection for Caspers…

Everyone welcomes the spring after a drawn-out winter and the anticipation for long summer days spent outdoors grows with the daylight hours. In the UK we get so desperate for summer’s arrival that we start shedding clothes like securities in a Goldman Sachs firesale the instant the first weak rays of sun tip the mercury into double figures – goosebumps or no, those pale chicken legs aren’t going to tan themselves! But, for me at least, you just can’t beat the excitement that comes with the first snow of winter, in that special moment after waking up to a winter wonderland but before the beautiful blanket of snow turns into a treacherous ice rink.

Both being lovers of snow, we’ve spent the last few Januarys working, skiing and eating copious amounts of melted cheese in a little winter hideaway called La Chapelle d’Abondance in the French Alps, where Stacker’s parents have an apartment. It was there that two years ago, over pints of stout at the local microbrewery Le Fer Rouge, we first decided we were going to pull the trigger on leaving Paris and becoming nomads. Three months later we’d had our own firesale and we were off on our travels.

Our favourite Dutchie demonstrates the tour de force of Fer Rouge beers – they can change your life!

This January however turned out to be the best so far and an absolutely bumper year for snow. Several nights of heavy snowfall dawned into sunny and clear days and beautiful skiing conditions. Every day we opened the blinds to a renewed winter wonderland. For someone who first cut her skis on the icy sheets and mud patches of the 2006/7 season (I’m a late bloomer), I’ve always been wary of deep powder but this year I got plenty of practice and one day something finally clicked. Cradling my skis in aching arms as we waited for a shuttle to take us home, I couldn’t stop smiling from the buzz of breaking out of my plateau. 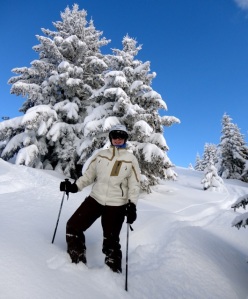 A soft landing should you need it!

The next day we hurt so much from skiing we decided to take a break and play in the snow instead. We started with a massive snowman then decided to build an igloo, thinking this was something we could easily do in an afternoon. In the end it took us over a week of on-and-off work to form all the blocks and get the damn thing done but when it was we had our very own Ice Bar to have apres ski drinks in. 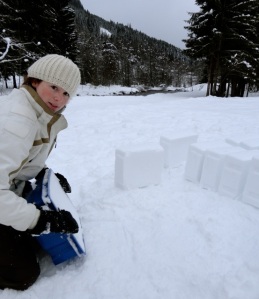 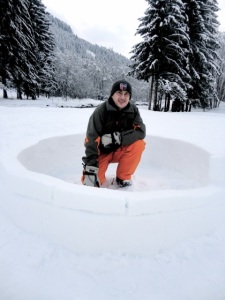 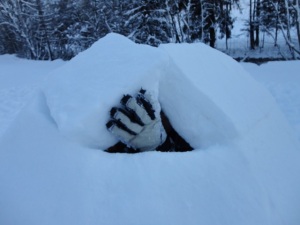 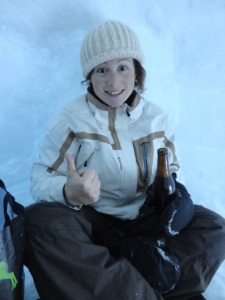 Towards the end of January, we had yet another great day of skiing despite both having taken our first tumbles of the season – Stacker on his head, which may perhaps explain the later events! We’d just had a blast on one of Stacker’s favourite black runs that is often a disgusting mix of steep choppy snow and sheets of ice but was that day a soft mogul field with nobody on it, when Stacker suggested we go ski through a copse of trees that we’d been through on a previous day – a day on which I had been oblivious to the fact that Stacker’s sudden fondness for going off into the trees was not only because the snow was favourable for it this year but also because he was trying to scope out cool spots. 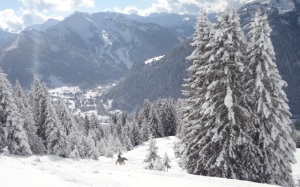 Stacker on a reconnaisance mission..

“Go right at the top of this T-bar,” he told me. I, however, had my eye on the expanse of snow to the left and objected. He started to insist more on going right then quickly dropped the subject, probably in fear of raising my suspicions. In retrospect him giving up on an opinion so easily should have been even more suspicious. As the snow squeaked and crunched under my skis, I rested my right temple on my gloves and  looked out to my left. The snow was glittering in the sun and I remember thinking something cheesy about how cool it was that all this snow was formed by countless millions of tiny unique snowflakes that fell from the sky. At the top I flirted with the idea of going left anyway but decided to go right to make Stacker happy and he gave me a bizarrely serious nod before starting off towards the trees.

He dropped out of sight briefly and as I caught up to him I was too busy trying not to crash into a tree that I didn’t notice he’d taken off his skis. Brushing off some pine fronds, I cracked a joke about how this wasn’t a good time to be tree-hugging and looked up to see him standing in a clearing and grinning widely. Hmm, I thought, that joke had gotten a better reaction than I’d hoped. I skidded up towards him. Still grinning, he ripped off both his gloves and started his spiel.

At first I just thought the awesomeness of the day was why he’d decided to get mushy on me at that moment but then he got down on one knee and it finally filtered into my thick, helmet-clad skull that Stacker was proposing. Of course my answer to his question was yes but, graceful as always, I followed that up by promptly falling half on my butt and half in his arms – trying to embrace someone who is kneeling while you’re wearing skis is a lot trickier than it looks!

And she says yes!

After the obligatory tears (I’m nowt but a softie really), we snapped some pics and then quickly agreed on the mutual terms of our engagement – the word “fiance” was to be outlawed upon pain of a $10 penalty. After that we did the only decent thing people in our situation could do at that point – head home to pop some celebratory Champagne in the igloo! Woop!