“As you can see there aren’t a lot of men around here” said Jeanette, making me think of at least three women in my family who would have enjoyed that comment. We were standing in the roasting room of Hilo Coffee Mill, a coffee plantation and roastery and the smell in the air of caramel and vanilla and roasting beans was heavenly.

Jeanette, the manager of the – as she put it – “woman-run” operation, was beginning our tour by explaining to us the different phases of getting coffee from plant to cup. As she talked it became clear that this was more than just a coffee plantation. Here was a group of people with real passion for their work but also for the community around them. As if to illustrate the point, halfway through the talk a local farmer came in to drop off a couple of buckets of his own beans to get roasted and was welcomed like he was family.

As Jeanette showed us around she also demonstrated their commitment to sustainability. We saw how the plentiful rainfall is gathered to use for washing the coffee after the pulping and fermentation stages and for decaffeinating coffee. After the beans are dried and hulled, the papery skins are recycled as nesting for their many chickens. The chickens in turn act as bug control and also provide fertiliser for the farm.

Coffee beans drying out in the drying shed

As we left the roasting room and moved out to the fields, we passed by a large hanger, which is host to a bi-weekly market where locals can sell their “Hawaiian-grown or Hawaiian-made” goods. It was topped with millions of dollars’ worth of solar panels. They’d managed to get the whole structure sponsored by an energy company but sadly that company had then failed to come and hook the panels up to the grid.

The free-range chickens gather around for a feeding

We navigated around the hordes of chickens to visit the “experimental” mocha nursery, the rows of coffee trees, the drying shed and the pulping shed. Jeanette pointed out white pineapple, guava and tea along the way. She encouraged us to pick a ripe coffee cherry and taste it. To my surprise what little flesh was on the bean was sweet and tangy, without a hint of the drink it would eventually be turned in to. If the beans weren’t so valuable, I imagine we’d probably all be eating the fruit as a sweet accompaniment to a gooey slice of Brie. 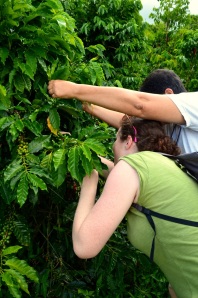 Back in the shop after the tour, we tasted some different roasts with all the seriousness of a wine tasting. Just like wine, coffee is assessed on more than just its flavour profile – there’s also aroma, acidity, body and finish to consider. We enjoyed a medium roast espresso but then fell unabashedly in love with the iced pineapple-flavoured coffee. Don’t knock it till you’ve tried it!

I filled my arms with bags of coffee, coffee cherry tea and some Chinese pu’ehr tea, saying out loud they would be Christmas presents but a nagging thought told me we’d probably drink it all.

Coffee cherries – the red ones are ripe for the picking.

As well as trying the local coffee, before arriving in Hawaii we’d also been looking forward to noshing on plenty of fresh fish and trying the pork that Hawaii is so famous for. And indeed the wasabi crusted Ahi at Postcards Cafe, the blowtorched rainbow roll at The Dolphin and the Hawaiian-style roasted pig at our friends’ wedding were some of our favourite meals.

What I had no idea about though was Hawaii’s long and colourful history of cattle ranching and so I hadn’t expected to encounter some of the best steaks I’ve ever eaten here. The slow-cooked, fork-tender short ribs we ate at Merrimans in Waimea also had us begging for more.

In 1793 a British sea captain presented King Kamehameha with a gift of a few longhorn cattle and, thanks to the ban the king placed on harming the animals, they rapidly reproduced and formed wild herds that rampaged through the Big Island. When the royal protection was finally lifted two decades later, cattle ranching took off and Parker Ranch in Waimea, which still exists today, became Hawaii’s first and oldest ranch. When driving around the Big Island we often came across cows roaming on the lush pastures; a sight that has become more and more uncommon in America as raising cattle is increasingly done in factories and out of sight.

The sad fact though is that, these days, many of the calves raised in Hawaii will be shipped off to the mainland to be “finished” on grain and then processed in enormous meat plants. Meanwhile the beef Hawaii imports from the mainland and abroad is often cheaper than that that is raised in Hawaii and fully grass fed. However, after a tough few decades for the Hawaiian beef industry, consumers are increasingly favouring local produce for its quality and the returns it brings to local communities.

After encountering such high quality meat on the islands, it came as a surprise when I learned that SPAM – canned processed meat – is a popular staple here. Hawaii consumes more Spam than any other state in the union despite – with its population of a million and change – being amongst the least populous.

In Hawaii SPAM can be found in myriad forms and flavours and is eaten in many ways – in a burger or sandwich, in stew, fried into spam-fried rice, cooked and  served on top of rice for lunch or with eggs and rice for breakfast. Thanks to the strong Asian influence in Hawaiian cuisine, rice features heavily in many dishes but the king of the SPAM-and-rice combo is most definitely the sushi-like SPAM musubi.

They’re made by laying a seared slice of spam atop a block of rice and wrapping it with a strip of seaweed and serve as a compact but filling snack. In almost any convenience store or 7-Eleven, these can often be found wrapped in plastic and breaking a sweat in the hot deli section where you’d normally find those limp hot dogs. 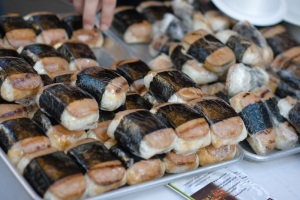 I didn’t work up the courage to try one but I had a growing feeling that I should give SPAM a chance because, well, when in Rome and all that. Besides, how many unidentifiable patés or undesirable cuts of meat have I tried in other countries and enjoyed in spite of myself?

Since we had planned to do a four day hike on the Kalalau trail, I figured why not put SPAM back in its original context and use it as the high-calorie, non-refrigerated meat product it was conceived as. And so it was that I cracked open my first packet of SPAM on day three of our hike for some extra sustenance before tackling a particularly hairy part of the trail.

Sneaking some SPAM into our hiking supplies

After my stint in the Territorial Army, I’m no stranger to mystery meats with scarily long shelf lives and I’ve come to learn that on a multi-day hike, pretty much anything tastes better than your hundredth granola bar, especially something savoury.

The slightly warm, oily slab of meat flopped around in my mouth like a second tongue while emanating a smell reminiscent of cat food. Giving no resistance to my teeth, it melted against my palate and released a stream of grease-flavoured sludge into my throat.

Luckily SPAM musubi isn’t the only offspring of the Japanese influence. If you want to rid your mouth of the taste of nasty canned meat or are desperate for something to help fend off the heavy tropical heat, you’re in luck because in Hawaii you’re never far from a shave ice. First introduced by Japanese sugar plantation workers, who shaved ice from big blocks using swords or machetes and flavoured it with fruit juice, the thirst-quinching preparation has become implanted into Hawaiian life – not least because it’s a firm tourist favourite.

It’s known variably as shave ice (yep, no d) or ice shave, is sold pretty much throughout the islands and is the subject of a raging debate amongst tourists and locals alike over who serves up the best version.
We followed up on a tip from a friend of a friend to visit Itsu’s fishing supplies shop in Hilo on the north shore of the Island of Hawaii. From the outside the candy coloured shack looks pretty unassuming and certainly looks at first glance to be a place more likely to be selling bait than frozen desserts.

Istu’s Fishing Supplies (and supplier of shave ice) in Hilo

Inside, the back of the shop was stocked with fishing supplies, as promised, but the front of the shop was dominated by a counter festooned with signs telling us what to do, where to stand and what refreshments to order. We obediently retreated to behind the sign for shave ice and waited patiently, trying not to look as if we were loitering by the nearby No Loitering sign.

The older man behind the counter looked up briefly, ascertained that we weren’t there for fishing goods and then looked back down at whatever he was doing with his hands behind the counter. It was a long shot from the kind of welcome we’d become accustomed to since arriving on the island. We waited a bit longer and eventually he grunted something and a woman, presumably his wife, bustled out from the back of the shop to help us. She offset her husband’s grumpiness with a big, friendly smile.

Not knowing what to expect we ordered two large shave ices. The woman pulled out a hunk of ice from the freezer and attached it to a contraption that looked like it shared an ancestor or two with an old Singer sewing machine. She started the machine up and suddenly the ice was being shaved into soft fluffy snow. 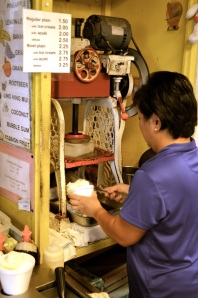 Our ice gets shaved

“Flavour?” she asked me. “Grape, please” I replied. She looked back at me expectantly. “Erm, Root Beer?” Still no movement. I tried again “Coconut?” That seemed to get me out of the loop. “Ice cream inside?” was her next question and of course I never say no to ice cream. She began scooping up the snow pressing it into the cup, pausing only to add a blob of vanilla ice cream in the middle. Within seconds she turned around with a ball of white snow, but it didn’t remain pristine for long. As she drizzled my three chosen flavours on to it, the ball of ice shrank and splintered as it absorbed the coloured syrups into its structure.

Outside we found a spot a respectful distance from another No Loitering sign and tucked in. We attacked the multicoloured crunchy ice, tunnelling down to the soft ice cream centre, and felt the cool hydration spread into our veins.

Instant converts, we were back again the very next day ready to try some more flavours but this time the grumpy man brusquely informed us there was “no shave ice until 2pm”. We were crushed (the ice was not) but luckily Itsu’s isn’t the only shaver of ice on the islands even if it was, in our experience and to our annoyance, the best.