It was 3.30am and I was sleeping soundly when the sound of Stacker’s iPhone alarm rang out, its electronic chirpiness belying the miserableness of the hour. Stacker rolled out of his bed and walked over to shake me out of bed. It was apparently time to leave for my “birthday surprise”.

We were staying at a laid-back, $20-a-night hotel by the Red Sea in Aqaba, Jordan. The hotel also doubled as a dive centre so my immediate thought was a dawn diving session.

“What do I need?” I asked nervously. “Nothing, just get dressed” replied Stacker. I reluctantly pushed back the covers – even in southern Jordan nighttime in February can be frigid and $20-a-night doesn’t buy you much in terms of heating.

A few minutes later I was being bundled into a car by Stacker and my brother Sproglet. The roads were quiet as we left Aqaba and started driving away from the coast. Forty-five minutes later, the scenery was starting to look more and more desert-like and I had to abandon the diving theory.

Eventually we pulled up in the empty parking lot of a shuttered petrol station, in what seemed to be the middle of a dusty nowhere. At this point I’d clocked on to the fact that we were back in Wadi Rum, the beautiful red sand desert we’d spent a night in only a week earlier, but I was still oblivious as to why we were there. The petrol station seemed abandoned and there wasn’t another building or car in sight. If I hadn’t been with my brother and partner I might have been seriously worried about what was going to happen next. 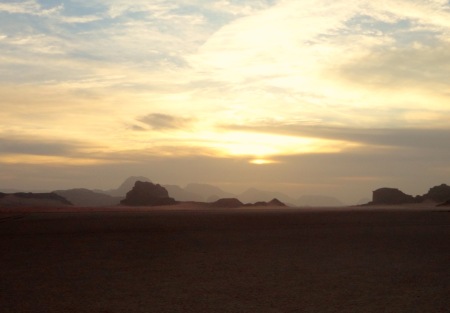 We were clearly early because after some covert texting and calling Stacker said we’d have to wait a while. I tried not to grouch about the early start and, instead of coffee, drank in the sight of the sun rising out from behind Wadi Rum’s characteristic red rock mountains.

Half an hour later I spotted the convoy of 4x4s approaching, kicking up dust from the road. One of the vehicles was towing a trailer and as it approached I saw it was carrying a giant basket. The boys looked at me expectantly but I still hadn’t figured it out. I was wondering what on earth was being transported in the basket.

Then it clicked: the basket was for transporting people and soon those people would be us! The convoy from the Royal Aero Sports Club of Jordan pulled up and out stepped Captain Khaled Shishani, a small but robust man sporting a battered bomber jacket and a fisherman-style beanie. He smiled, the crinkles around his eyes running deep, and extended a weathered hand to each of us. We all instantly liked him.

Stacker asked about the weather. Apparently the status of our flight was in jeopardy because of the wind. The Captain told us we were going to attempt the flight but warned us that, at any moment and depending on the conditions, he may have to call the flight off and we needed to understand that the decision was solely his. We were all happy to agree. For some reason we already knew that if you’re going to put yourself in the situation where there’s nothing but a bag of hot air and a few layers of wicker between you and certain death, you want the person controlling that situation to be Captain Khaled Shishani.

We were ushered into a minivan and after a short drive we were at the launch site. The crew jumped into action. Within minutes they’d spread the hot air balloon out on the dry, cracked earth and were starting to inflate it. The fabric of the balloon rippled and billowed and slowly, sleepily, it began to perk up. 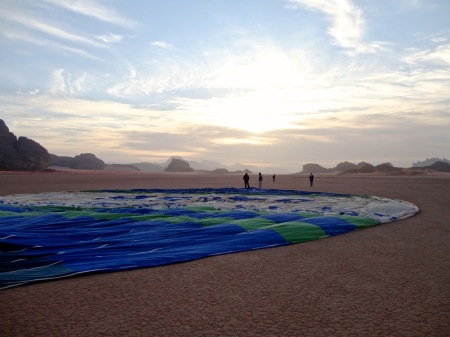 The balloon is spread out 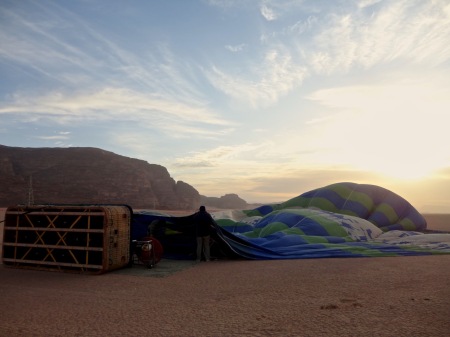 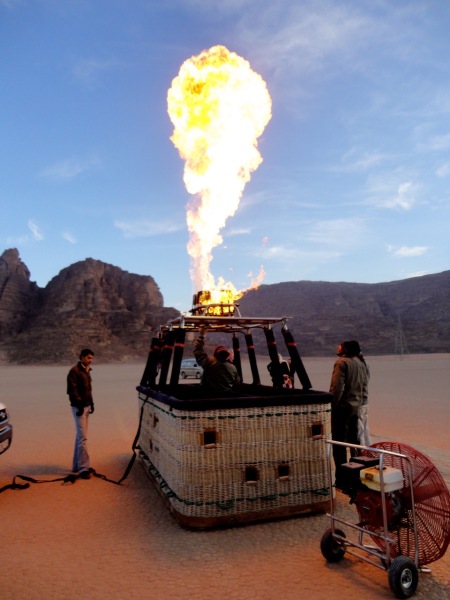 I imagine myself as Gisele Bündchen

Thirty minutes later, the transformation from a piece of limp fabric on the ground to a taut, airborne ball was complete. The balloon seemed eager to go and so were we. We were invited to climb aboard, using holes in the basket as footholds.

Captain Khaled pulled the gas release and a jet of flames burst out of the burner, the loud roar making me jump. The basket peeled away from the ground. We were still tethered to one of the 4x4s and, feeling the strong lift of the balloon, I began to wonder if it would be able to hold us or if we wouldn’t be taking the car with us too. Luckily it remained earthbound and we were jettisoned. As soon as we were free of the tether, the flames roared again and we climbed with alarming speed.The landscape around us grew, just as the details of it seemed to shrink. I felt a little lurch in my stomach.

Captain at the controls

Captain Shishani expertly worked the ropes and levers of the balloon while simultaneously cracking jokes and fielding all our questions about how it all works. I couldn’t help thinking about how ridiculous it was to be flying in a basket but the view, the unbelievable view, was worth it. A plane might feel more secure but no tiny portal window could compare with that unencumbered vista. 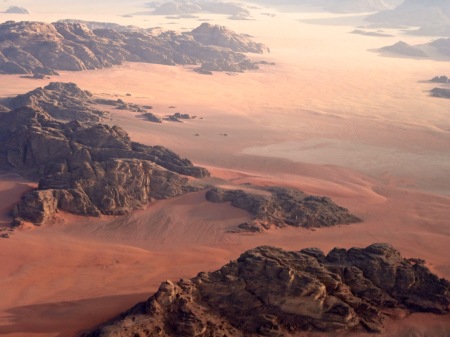 And then, all too soon it was over.

The winds were too strong and we were picking up a lot of speed. The Captain decided we had to abort the mission. We started dropping altitude and he got on his radio. Out of nowhere, we saw the 4x4s come streaking towards us on the desert floor. Somehow the crew managed to catch the tether and reattach it to one of the cars. It was a tricky operation but apparently necessary to slow us down and prevent the basket landing sideways because of the winds. 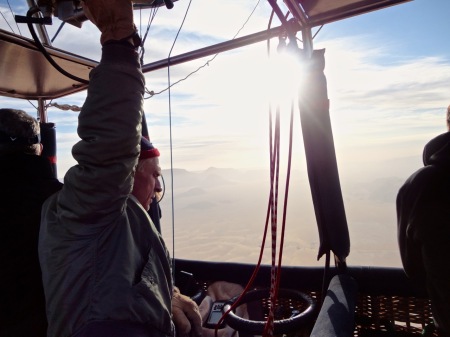 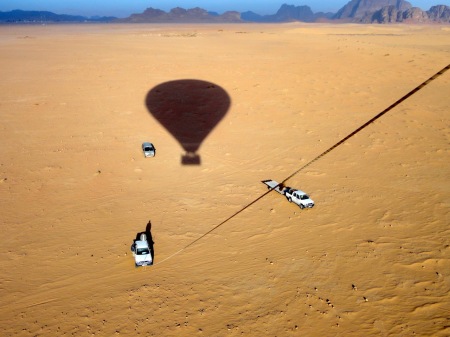 Coming in for landing

The landing was gentler than I expected and we all disembarked for some welcome tea and cake. Because our flight was cut short, Captain Shishani refunded everybody half the price of the trip, something I thought was more than fair considering that the duration of the flight probably has little bearing on the overall expense.

We arrived back in Aqaba around the time I’d normally have breakfast, as if it had all been just a crazy, crazy dream.